Why I Still Love a good HDR Photograph

Why I Still Love a good HDR Photograph

HDR photography has gotten a bad rap since the very beginning of digital photography.  On internet forums everywhere, it’s the technique used to create jarring, overly sharpened, vivid photographic nightmares. Just type Bad HDR into Google for an unnecessary refresher on what 2008 looked like.

But HDR is coming back. If you’ve used any of the major phones over the last 4 years, they’ve got HDR baked into their cameras. When you take a photo with Instagram to make a story, it automatically applies some form of HDR processing on every photo you take. It’s used by architecture photographers, product photographers, astrophotographers, and even fine art landscape photographers.

HDR Photography is a technique that combines photographs at different exposures and combines them to capture the complete tonal range of the scene. Photographers use HDR techniques when a single exposure can’t capture all of the tones in a scene.

That’s the crux of it. Many scenes, especially at dusk and dawn have so much variation in the amount of light throughout an image that it can be impossible to capture everything. HDR solves that.

Digital sensors are not even close to perfect

Have you ever photographed an out-of-this-world sunset? The kind flush with red and purple skies, cotton candy clouds, and a brilliant shade of yellow crossing the landscape? Then you look at the photographs afterwards, and they’re kind of okay, but the sky colours aren’t saturated — or if they are, the land is completely black.

You did everything you knew how to do. Like making sure the exposure was right using the histogram, setting the camera up on a tripod so you could keep this ISO down, and using a cable release so you don’t shake the tripod.

It’s not working out because of a little issue called dynamic range. Human eyes are capable of taking in at least three times what a high-end camera can capture. I’m sure cameras will get there after they’ve spent at least a few million years evolving. But until then, at least we’ve got HDR (which stands for High Dynamic Range, fyi).

As well, it helps capture way more colours than a single image ever could. Most cameras can only take 8-bit images with just 256 colours. (That’s 2^8 for the nerds in the room). But High Dynamic Range images are essentially 32-bit images, holding more than 4 billion colours!

The process works by combining multiple photos taken at different exposure values to capture the entire range of detail in the scene. This works especially well at sunsets and sunrises when you truly need to capture everything to make a great photograph.

How do I take an HDR photograph?

First things first. You’re gonna need a tripod if you don’t have one already. Once you’ve followed my 4-step system for finding and taking amazing photographs, set your camera on the tripod, and set up exposure bracketing. If you own a DSLR, you’ve probably accidentally set this up before.

It’s that line on the back of your camera with measures going from -3 to +3. Press Q, and scroll over to it. Then you’ll use the shutter wheel to spread the bracketing. Usually, I do -1 stop, 0, +1 stop, but you can go further, or take more photos if you need further range in the scene.

Make sure your camera is in focus, the first shot is evenly exposed (the camera will vary the shutter speed for the next two) and then set a 2-second timer (or better, use a cable release), and take three photographs.

No two cameras operate the same, and some might not have automatic bracketing. If your camera doesn’t, then you can manually bracket just as easy by taking one photo at the correct exposure, underexposing the second by 1 stop (3 clicks of the shutter wheel), and over exposing the third by another stop. You can also take more than 3 photos, but it won’t always make a difference. Other than slowing down Lightroom, of course.

How to process HDR in Lightroom

This is the fun part. When you get those sharp images into Lightroom, there is a very quick workflow to combine and edit HDR photographs.

Step 1: Auto stack by capture time. This is one of the most beautiful updates Lightroom has done. Introduced in Lightroom 2020, this feature groups photos taken within a certain time frame. If the stacks don’t work out, you can change the time intervals between auto stacking to make it collect only the brackets.

If Lightroom stacks too many photos, you can unstack the group by pressing Ctrl + Shift + G, (Command + Shift + G on Mac).

Step 2: Now that all photos are correctly stacked, you can cull through the image set. The quickest way is to keep Caps Lock on, and use P (pick), U (unflag), and X (reject) to choose the best photos for further processing. If you want a more in-depth explanation on culling, take a look at my previous article on Dodging and Burning here.

Step 3: You’ve chosen your favourites, now it’s time to make the magic happen. Select all of the stacked sets of images in Library Mode, and press Alt + Shift + H on PC, or Ctrl + Shift + H on Mac.

Step 4: Wait. If you have a lot of HDR images to merge, this process can take a long time depending on your hardware. Sometime soon I’ll write an article about what to look for when upgrading a computer for editing. But for now, if you have an older, or cheaper PC, this process could take a long time. To be fair, people who have $2,000+ editing rigs sometimes STILL have to wait forever, so at least you’re in good company.

Apply a preset to increase the contrast. HDR images start out pretty flat because they have a lot of details in both the highlights and shadows. Presets are one of the most powerful tools at your disposal to make sure you have a clean and cohesive editing style throughout your portfolio of work. That cohesion in editing is what makes a photo one that could only ever have been taken by you. If you haven’t built your own presets yet, I’ve made mine available to help photographers learn what kind of looks are possible.

The main reason that I make High Dynamic Range images is so that I can keep detail and saturation in the bright parts of the image. It can be tempting to bring down the highlights, brighten up the shadows and leave it at that. But that’s when you start getting flat, boring images. The best advice I can give is to always make sure there are defined black and white points in every image. So if you bring up the shadows, bring down the blacks to keep that contrast strong. Just using the contrast slider can work, but it’s not as powerful as learning how to make your own contrast.

Having a black point means that there are some shadows so strong they don’t have any information, or are pure black. This gives definition to a photograph. The natural contrast will help the viewer see the image as a real scene, rather than a doctored image.

But the editing process is subjective. Every person will have a different preference, so it’s best just to have fun! Take the middle exposure image from the previous stack, and compare what happens to each image as you move the sliders. I know you’ll see a world of difference!

What if my HDR images have ghostly apparitions?

There can be a few issues with HDR imagery. The first and most common problem is called Ghosting. This is when objects in frame move between frames. When they’re combined in the final image, Lightroom makes this foreign piece look soft and blob-like. But don’t worry! There’s an easy fix.

Is there a weird colour taking over the entire image? This could be because of two things. If it’s magenta or green, it could be because of Lightroom calibration. Scroll down to the bottom panel in Editing mode, and hit the lightswitch beside Calibration to turn it off.

If that doesn’t get rid of the strange cast, there’s one more spot that should do it. If you’re using the latest Lightroom (version 10), the panel will be called Colour Grading. In older versions will call it Split Toning. Turn this panel off and on using the light switch and it should solve your problem. The reason this happens is because the HDR process makes a flat image, which doesn’t have as much of a defined shadow or highlight. So if there is a significant, colour-specific change to the shadows or highlights done in the calibration or colour grading, it might accidentally affect the entire image. Usually these changes are made by a preset, so it may be best to change the settings if you’re seeing this issue often.

These articles are quite in-depth, and they’re meant to help everyone learn the basics of photography. But there are so many more techniques to learn to become a master. My Photography Cookbook is the perfect place to start for anyone who wants a simple guide for every situation. Like any cook can follow the recipe of a world-class chef, the same is true for photography. As a bonus, there are also hours of succinct, digestible videos to help you improve. 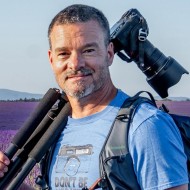